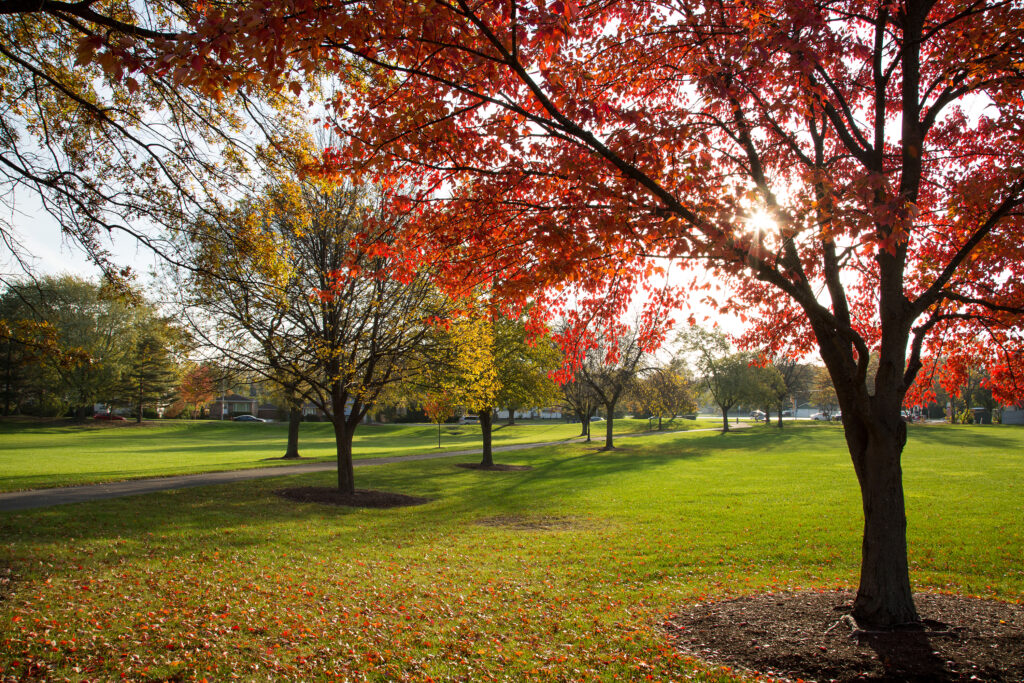 The Darien Park District was incorporated on May 18, 1974 by voter referendum. Boundaries were established and five commissioners were elected.

The first administrator was hired in March of 1975. An office was established in Fairview School. The first recreation program brochure debuted the summer of 1975 and featured 21 activities.

Land acquisition for park development was a key focus of the Board. City detention areas were the first to be developed into parks. These included Pinewood Park (5 acres at Arrow & Glen Ln.), Birchwood Park (5 acres at Emerson & Walden Ln.), Holly Park (4.5 acres at 71st & Holly) and Chestnut Park (1 acre at 67th & Richmond). Also acquired was a 20 acre parcel at Plainfield & Clarendon Hills Rd. that would eventually become Darien Community Park. A lease agreement with DuPage County provided the 6.7 acres at 79th & Cass that became Lindenwood Park.

The district quickly outgrew its Fairview School office and moved to 925 67th St. after the library had moved out. The staff was comprised of an administrator, recreation director and a secretary.

In the mid-1980’s, two acres were purchased at 802 Plainfield Road to accommodate our maintenance department and the administrative staff including two recreation programmers, an accountant and clerical staff.

Athletic fields and parks continued to be improved and/or acquired including soccer and softball fields at Lakeview Jr. High and improvement of school fields used by the Darien Youth Club. An area at the southernmost end of town was acquired and named Smart Oaks Park, in honor of the Smart family, early settlers of the property.

In 1988, the recreation department moved into an old farmhouse at 7201 Cass Ave. An oversized garage on the property served as the District’s first program facility. This allowed for an even more expanded offering of recreation programs.

The South Grove Park District petitioned to be annexed into the Darien Park District. A detention area in Farmingdale Ridge was acquired and developed as Ridgewood Park.. The corner of 75th & Fairview was purchased and developed as Westwood Park. Also purchased was the Stanton property located between Plainfield & 75th St. This property is now the site of the Darien Sportsplex.

In 1993, the recreation staff moved to 133 Plainfield Rd. following the closing of Marion Hills School. This allowed for expansion of many existing programs but more importantly allowed for daytime programming. The Marion Hills location was used to house preschool, senior activities, exercise classes and a myriad of recreational opportunities available to all.

Following the death of Ida Meyers, the park district acquired 10.2 acres to create Meyer Woods. This is the District’s most passive park and a popular site for picnicking.

In 1999, the park district dedicated it’s most recent park, Driftwood Park located in the Darien Club subdivision. This park though small, has a nautical theme play area and is very popular throughout the neighborhood. In 2000, the park district purchased 10.5 acres from School District 66, expanding South Grove Park. This new acquisition currently features a playground; but future plans will include soccer fields.

The Darien Park District Mission Statement reads: “To provide the highest quality recreation programs, facilities, and parks, that meet the needs and enrich the lives of all Darien Park District residents.” As our residents lifestyles and trends change, and our parks and facilities age, the challenge for the staff is not to meet, but to exceed our residents expectations. The benefits of parks and recreation are endless…